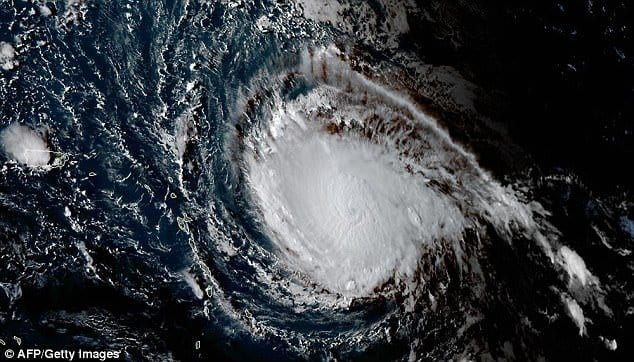 Harvey and Irma aren’t the only storms looming over the U.S. During these times of governmental uncertainty, we lend an ear to our Washington Insider, Greg Valliere of Horizon Investments, to drown out the incessant white noise from primary market factors.

THE MEDIA IS BREATHLESSLY PROCLAIMING that the fall agenda could doom Donald Trump’s presidency and rock the stock market, as his woefully understaffed administration fails to cope with seven major threats. So let’s take a contrarian view this morning and look at how September could actually be an opportunity for Trump.

TRUMP HANDLED ONE HURRICANE WELL and now faces another big one. He can build on a solid performance not just with hurricanes, but with seven crucial issues – many of which just might break his way:

1. A threat of war. Chances of U.S. strikes on North Korean missile sites have increased, but in private Trump’s generals are urging patience. The president still has cards to play – this morning’s Wall Street Journal editorial details several measures short of war that he should take. We think he will embrace those measures.

2. The threat of a federal default. Trump could win a major victory, but he will have to expend political capital – telling his base that a debt ceiling increase must pass. He also could tie the debt ceiling to hurricane aid, as we predicted last Tuesday, which would win enough votes from both parties to swamp opposition from the House Freedom Caucus. Trump is never shy about taking credit, and the inevitable debt ceiling hike could be a victory for him.

3. The threat of a government shutdown. A relatively easy one. Trump can sign a deal just before the fiscal year ends on Sept. 30, relying on a continuing resolution for 2018 spending levels that will prevail until mid-December. Does Trump want a victory on this – or a wall with Mexico, which doesn’t have the votes in either house? It’s up to him; we’d guess he would take an easy victory on Sept. 30, then look for a deal later in the fall.

4. The threat of more White House dysfunction. The grumbling is getting louder in the Trump inner circle that new Chief of Staff John Kelly has soured on Trump – and vice versa. Trump needs to cool it – Kelly is very solid – and he needs to patch relations with Gary Cohn. Again, whether Trump looks good on this issue is strictly up to Trump.

5. The threat of a breakdown in relations with Congress. Trump has meetings with congressional leaders today and tomorrow, and we think he will reach an understanding with Mitch McConnell and Paul Ryan. He will encourage them to come up with compromises on DACA and budget issues – he’ll take a deal, any deal – and we think Kelly will get him to tone down the insults. Hurricanes Harvey and Irma have given birth to a little bipartisanship.

6. The threat that tax reform may die. Another issue where there’s upside potential. Since many insiders on Capitol Hill think tax reform is near death, Trump’s advisers could breathe life into the fallback – corporate and individual tax cuts, with substantive reform later. Trump needs to show some leadership on this issue, and we think he will later this fall.

7. The threat that the Mueller probe could intensify. Several Trump allies are scheduled to testify at congressional hearings this fall on Russia’s involvement in last fall’s election. The president needs to clam up on these hearings; whether Kelly can curb Trump’s tweeting is doubtful. In any event, impeachment talk has faded, for now.

OF THESE SEVEN ISSUES, there’s a potentially decent outcome on fiscal policies, if Trump is willing to work with Congress. But it’s difficult to make a case that the Mueller probe will turn out well for Trump – the investigation has intensified, quietly, and while it may not lead to impeachment, it could cripple Trump next year.

THE MARKET IMPACT: The same fundamentals apply – decent GDP growth, tame inflation, steady interest rates, a healthy labor market, and solid corporate earnings. The markets have set a low bar for Trump; they just need him to show a little leadership. If he does, September might not be a disaster – but if North Korea continues to lob missiles toward Japan and Guam, investors may have to confront the unthinkable.

Keep up with Greg Valliere in the news by following him on the Horizon Insights page:
Visit Insights

DISCLAIMER: Horizon Investments, LLC is an SEC-registered investment adviser. The views expressed are those of the author, Greg Valliere, and do not necessarily reflect the views of Horizon Investments. They are subject to change, and no forecasts can be guaranteed. The comments may not be relied upon as recommendations, investment advice or an indication of trading intent. Horizon Investments is not soliciting any action based on this document. In preparing this document, the author has relied upon and assumed, without independent verification, the accuracy and completeness of all information available from public sources. Investing involves risk, including the possible loss of principal and fluctuation of value. For more information about Horizon Investments, contact us by calling 866.371.2399 or visit our website at www.horizoninvestments.com.